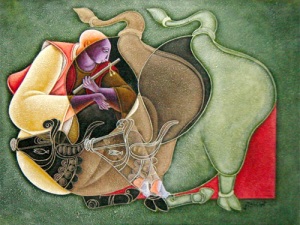 Although there are many Vedas written, the most important is the Rig, which contains over 1,000 hymns directed to the gods. The content of these hymns includes praises, blessings, sacrifices, and curses.  These hymns are the major way in which the Aryan people praised their gods.  The subject of the hymns is the personification of the powers of nature.

The hymns are written in poetic form:

“This light hath come, of all the lights the fairest,
The brilliant brightness hath been born, far-shining,
Urged on to prompt the sun-god’s shining power.
Night and Morning clash not, nor yet do linger.”  (Bloomfield 30)

There was neither non-existence nor existence then; there was neither the realm of space nor the sky which beyond. What stirred? Where? In whose protection? Was there water, bottomlessly deep?

There was neither death nor immortality then. There was no distinguishing sign of night nor of day. That one breathed, windless, by its own impulse. Other than that there was nothing beyond.

Darkness was hidden by darkness in the beginning; with no distinguishing sign, all this was water. The life force that was covered with emptiness, that one arose through the power of heat.

Desire came upon that one in the beginning; that was the first seed of Mind/Consciousness. Poets seeking in their heart with wisdom found the bond of existence in non-existence.

Their cord was extended across. Was there below? Was there above? There were seed-placers; there were powers. There was impulse beneath; there was giving-forth above.

Who really knows? Who will here proclaim it? Whence was it produced? Whence is this creation? The gods came afterwards, with the creation of this universe. Who then knows whence it has arisen?

Whence this creation has arisen – perhaps it formed itself, or perhaps it did not – the one who looks down on it, in the highest heaven, only he knows – or perhaps he does not know.”