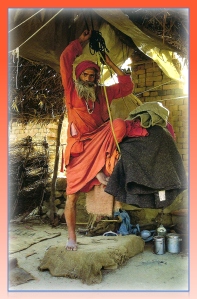 According to Sri Nisargadatta the purpose of spirituality is to know who you are, a viewpoint he expounded in the talks he gave at his humble dwelling in Bombay, where a mezzanine room was created for him to receive disciples and visitors. This room was also used for daily bhajans (devotional songs), meditation sessions, and discourses.

He talked about the ‘direct way’ of knowing the Final Reality, in which one becomes aware of one’s original nature through mental discrimination, a method which is common to the teachers of the  Navnath sampradya. This mental discrimination or the Bird’s way (‘Vihangam Marg’) was also presented by Nisargadatta’s co-disciple, Sri Ranjit Maharaj; wherein Self-Knowledge is gained just as a bird flying in the sky goes easily from branch to branch, instead of slowly crawling its way up the tree like an ant, as in the ‘Pipilika Marg’. Here the disciple reaches straight to truth, without wasting time in long drawn out practices that would take him to the ‘fruit’ no doubt, only slowly. He proposed to use one’s mental faculty to break from the unreal to the real, and the mind’s false identification with the ego, simply by listening to and constantly thinking over what the master has said, and knowing that “You are already That”.

The common teaching style of teaching of the Inchgiri Sampradaya masters (beginning with Shri Bhauseheb Maharaj) to Indian devotees was for the Master to select a passage from a traditional text on Advaita Vedanta, most commonly Dashodh of Saint Shri Ramdass as well as the “Yoga Vasishtha”, “Saachara” of Shri Shankaracharya, and the “Ecknati Bhagwat” of Saint Ecknath), and to expound upon the meaning and import of that selected passage. Nisargadatta Maharaj and Ranjit Maharaj both deviated from this formal format by giving informal discourses for the benefit of western devotees who did not have access to Dasbodh or the other texts, and who were not familiar with Indian traditions and customs.Many of Nisargadatta Maharaj’s talks were recorded, and these recordings form the basis of I Am That and all of his other books. His words are free from cultural and religious trappings, and the knowledge he expounds is stripped bare of all that is unnecessary.

Summed up in the words of  Advaita scholar and a disciple, Dr. Robert Powell, “Like the Zen masters of old, Nisargadatta’s style is abrupt, provocative, and immensely profound — cutting to the core and wasting little effort on inessentials. His terse but potent sayings are known for their ability to trigger shifts in consciousness, just by hearing, or even reading them.”

“Suppose a man is rich, he is wearing a lot of ornaments and expensive clothes; when he leaves his house there is always danger lurking. This is on account of the fact that he represents so many ideas, concepts, and because of his reputation that he is somebody, that he is a rich man. He is afraid of going into the street. A naked beggar who goes into the street has nothing to lose. Similarly, having lost everything, I have nothing more to lose; I can encounter any situation and fit into anything.”

— N.M., from “Experience of Nothingness”

“Eventually, you will find shelter and peace in no other ashram except your very own. That visranti — it means: ultimate relaxation — final abidance, will be available only in your ashram and nowhere else. The road is inward into your ashram.” — N.M., from “Experience of Nothingness”