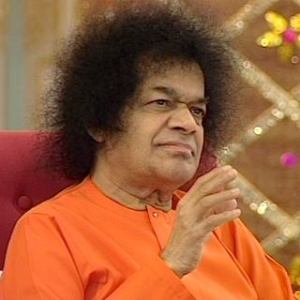 I Only Wanted Swami To Talk To Me! – A Darshan Story

On one of my visits to Puttaparthi, I had a really great experience with Swami. (I think it was during 1999). I was feeling very down and out.
I was feeling very small and insignificant and unworthy of even    talking to anyone.  I was just keeping to myself. then I prayed to Baba to talk to me  because that would make me feel better and worthy of being talked to by others also. With that thought, I went inside sai kulwant hall after having drawn  4th token (or something near to that no.) and I was  sitting in the second row in darshan on the men’s side.

Then the music started and Baba  came out from the Poornachandra Auditorium. He used to walk then. He shuffled forward taking letters, blessing trays. Finally he was opposite my row. He spoke to someone there.  Then He suddenly turned towards our side. There was a Russian sitting  in front of me.  Baba said something to him. Then suddenly He was looking at me and  saying something  in Telugu (I think because I heard something like “neevu” which is a Telugu word). My head was spinning. I couldn’t believe Baba was talking to me !! At the same time the thought passed thru my head “could Baba be mistaking me for some other guy, some Telugu guy”?? I dismissed that thought as soon as it came because i knew that  Baba knows everything. He doesnt make mistakes. Then Baba repeated what he must have said earlier, in English.  He said “Where have you come from ?” I was still too stunned to reply. Baba spoke a third time.  This time in Hindi. He said “Keedhar se aayaa?” meaning again  “where  had I come from.” I managed to say “SAI, Mumbai”. Then Baba threw up His hands in the air as if I had given the wrong answer and He said
“Oh!! Bombay!”

Then He proceeded to make vibhuti right in front of me and gave some to a Telugu farmer sitting next to me. Others nearby  stretched out their hands and Baba kept giving vibhuti to all. Finally  I also picked up the courage to stretch my hands out for vibhuti. But  Baba just turned away. When i was praying to Baba earlier in the  day, I had told him that “I dont want vibhuti or anything else,  Baba,  please just talk to me.” By turning away Baba displayed His omniscience. He proved to me that He knew my thoughts.  What a proof !! I sat there with tears flowing down my cheeks and couldn’t stop crying long after darshan. People would just look at me and I was not able to say anything. They just nodded
knowingly and said “Ananda” meaning bliss !! Baba does hear and answer  our prayers. He knows everything.