‘At first, name and form are essential, that is the reason why Avatars come, so that God can be loved, adored, worshiped, listened to and followed, and finally realized as nameless and formless.’ – Baba

After the physical passing of Sai Baba during April 2011, darshan experiences are no different from those experienced when he was alive.  In other words, the vibrations can still be felt. One might say that Sai Baba has not gone anywhere. Long ago, I remember reading a particularly beautiful story about Sri Ramana Maharshi. Ramana told one distraught devotee not to worry about his imminent demise, for he (Ramana) was not going anywhere. He had no place to go to that He was not already there! Ramana would remain available to all who sought darshan and solace in his ashram. So it is, I now believe, the same with Sathya Sai Baba.  Here is a short story from Diana Baskin who tells us that Swami told her just before his demise these few words: I am not going anywhere.

Why would Swami tell Diana Baskin these few words, I believe without a doubt he was telling her that he would always be available to those who were dedicated to him. He also was giving a broader message, his vibration and his essence would always be there in Puttaparthi. 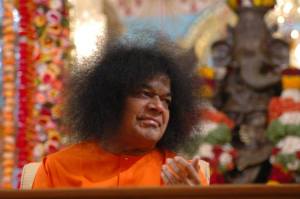 Swami, the Heart Core of our Life

Swami became my Guru when I first came to India in 1969, taking on the task of teaching me the principles of a spiritual life by building a solid foundation rooted in Dharma. Later, He became my Mother, taking over the task of nurturing, acceptance and unconditional love. Finally in 1979, Swami took the role of Father by introducing me to my husband, Robert, performing our marriage ceremony and extending His strong hand of support and gentle loving guidance throughout our marriage.

Swami was the heart core of our life. For the past 40 years, our life centred solely upon Him, and the anticipation of our trips to India that brought us in His physical presence was our nourishment. My husband and I were devastated and heartbroken as we lost all at once our Guru, our Mother and our Father.

But Swami did not teach us to be weaklings and even in the midst of sorrow His teachings rushed to my side, giving me strength and support while gently reminding me that there was a limit to everything.

When the husband of our friend died, Swami said to her that she could mourn his death but only for a short time; after that, she needed to let go of her sorrow. Last Words of Swami

I understood intellectually that to honour Swami and His teachings, I needed to put them into practice, be a master of my emotions and keep my focus on positive and constructive thoughts. While this helped to some extent, it was not enough. I longed to re-establish the direct heart-to-heart link with Swami that gives joy to life.

Swami had not only foreseen the problem I would encounter but in His infinite compassion had given the solution, unbeknownst to me, shortly before leaving His physical body.

One morning, after Bhajans as Swami was returning to His residence, His car stopped in front of me and as the driver lowered the window, Swami motioned for me to come forward. His voice was very faint and I had to lean into the car and read His lips to grasp His words. At the end of our brief conversation, He said something so unusual and out of context that I had to ask Him to repeat it. These were the last words Swami ever spoke to me.

For the year that followed, I pondered His words and questioned their meaning but failed to find the reason why He voiced them at that time nor could I find any sort of veiled connotation they might imply. It was not until a few weeks after Swami passed, in the midst of great sorrow and mourning that like a thunderbolt from the heavens it hit me! Not only did I understand what He meant from the deeper perspective of Advaita but a mere remembrance had the power to re-establish the precious heart-to-heart link and fill my heart with love. The powerful words of truth, love and wisdom. “I am not going anywhere.”