“Everything we feel in our heart changes the field of consciousness.”

“As a man who has devoted his whole life to the most clear headed science, to the study of matter, I can tell you as a result of my research about atoms this much: There is no matter as such. All matter originates and exists only by virtue of a force which brings the particle of an atom to vibration and holds this most minute solar system of the atom together. We must assume behind this force the existence of a conscious and intelligent mind. This mind is the matrix of all matter. ”

“That the as yet undivided chemical elements are absolutely irreducible substances, is currently at least very unlikely. Rather it seems, that the atoms of elements are not the final, but only the immediate constituents of the molecules of both the elements and the compounds—the Molekeln or molecule as foremost division of matter, the atoms being considered as second order, in turn consisting of matter particles of a third higher order.”
[Speculating in 1870, on the existence of subatomic particles, in opening remark of the paper by which he became established as co-discoverer of the Periodic Law.] 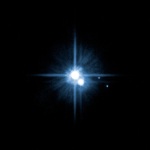 The fact of the matter is there’s No Matter. All is consciousness.