Isaac Tigrett talking with Sai Baba at darshan in 2009.
…… 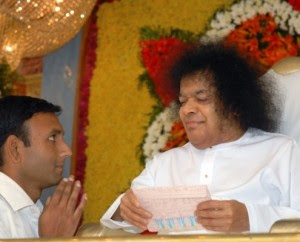 Madhu with Sai Baba during his student days 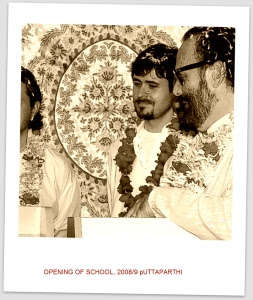 Easter Sunday 2011 is the saddest day in the memory of millions of Sai Baba devotees world-wide. It was the day He passed away. The day we never thought would come, but come it did and earlier than we had expected. It was the day “Love All – Serve All” died too. I use the term Love All – Serve All, because it is a well known quotation associated with Swami and is the one loved the most and its meaning is associated with everything Sai Baba taught over the years.

So what did Love All – Serve All really stand for during Sai’s life? Well, ‘what didn’t it stand for’ might be the better question to ask. Swami had for decades, come rain and shine, come pain or illness, gave two daily darshans to the huge crowds gathered at one or the other of his ashrams. I only remember Him ever missing darshan one month, that was during his recovery from His hip replacement surgery in June 2003. I was there in Whitefield at the time, on looking back, I keenly remember how miserable and utterly soul-destroyed we all were due to not seeing our Baba, the “One Light” that so filled us with joy and energy.

When the month was finally over, He gave a glorious come-back darshan sitting on a gulf buggy. I swear it was the longest darshan I’d ever had. He also gave a detailed talk about His hip operation on that day, July, 5th, 2003. He said, “I am not this body. Body consciousness leads to untold suffering. One has to get rid of body attachment in order to enjoy peace and happiness. What is this body composed of?

This body is a den of dirt and prone to diseases; it is subject to change from time to time;
it cannot cross the ocean of Samsara. It is nothing but a structure of bones.
O mind, do not be under the delusion that body is permanent. Instead, take refuge at the Divine Lotus Feet. (Telugu Poem)”

He also gave other hints during that talk that his time with us would not be long. And although we thought the buggy was temporary, it wasn’t. Swami no longer walked among us after the operation, he used a variety of vehicles such as the famous golf buggy that, I believe, he first used in the Whitefield Ashram and later on he used a small car, then during the last years a wheelchair.

He moved  among us for another six years, although the last year He appeared extremely ill and with the additional handicap of two strokes. His strength began to fail. Still, even then he came to darshan often, never giving in to the horrible suffering of that little impermanent body, that he told us he had no attachment to.

His message remained the same: My Life is my message. My life is one of giving and sharing with others. I give you what you want, so you will want what I have come to give. Love all, Serve all. Love ever, Hurt never. The message he gave was always the same message, only made different by the quotations and words He chose to pass on this all-important lesson, that we are born to live, love, share, and adhere to the highest values of human life.

Heart-felt grief hit all of us on the day He left his little body. Life would never be the same again. We had lost our “Sai Light” – our “Radiant Sai,” the giver of joyful bliss, often coupled with hard life-lessons too.  We were forced to face the future that would not include a physical Sai Baba. That beautiful form. He would not move among us in the flesh again. We had to do as He’d done, move on. Move on to a higher practise, one that required us to mature and seek the God within.

Oddly enough, he’d been living in the ashram at the time of Swami’s passing. He had predicted that Swami would die early in his 2009 Dallas talk, and he told us afterwards, that Sai’s passing had been no surprise to him.

In the whirl-wind of change taking place in that empty space left by the physical Sai Baba, things were changing fast. We had the drama where Mr. Tigrett claimed Baba had instructed him to build a retreat and a school somewhere in Coorg.  He’d called it the 7th Ray. He was given the name, the “Living Will” by the press, however, things did not go to plan.

Meanwhile, in the small  hill-top hamlet of Muddenahalli something else was unfolding, something none of us could have or would have ever imagined! Mr. Murthy, a long time devotee and senior officer there, claimed the spirit of Sai Baba contacted him, whereby instructing him to build schools and hospitals. He also claimed he’d had vivid dreams of Sai Baba.

Even more strange, an unknown student of Sai Baba, Madhusudan, emerged on the scene. This young man had a knack for mimicking Sai Baba. He had actually made quite an art of this during his student days. (How a student could mimic Sai Baba is a puzzle to me and shocking.)

A few years later during 2014, Mr. Murthy and friends, Madhusudan and Isaac Tigrett attended a gathering of  former VIP and studnets in Kodaikanal. It was during that rather impassioned meeting that the “Muddenahalli Baba” aka as “The Light Body” or “Sukshma Baba,” became the invisible source for everything Sai Baba. Apparently, we learned, Sai Baba’s  “subtle body” was using the former student to talk through! This affair had all the hallmarks of being delusional, because Sai Baba had often given speeches during his life-time, condemning those people who claimed he spoke to them. He said, time and again, he needed no one’s help to communicate messages. He had entire control over the universe and on all levels of life both living and dead, astral and causal. 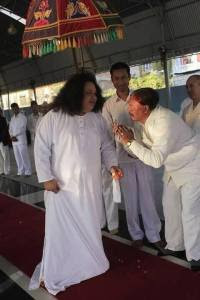 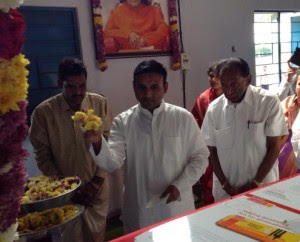 Another, the former student

Below video on how regurgitator does the trick, this time with a ball

Yet, all written statements and video clip from Sai Baba, declaring  He was beyond normal needs of communication and, whether in the body or not, He could contact anyone at any-time, or anywhere. Space and time were no barrier. This all fell on deaf ears. People flocked to Muddenhalli! There, they could relive their old darshan days once more, by following Madhusudan who mimicked Sai Baba’s every action.

Now, three years later, we see a bold Madusudan who not only mimics Sai Baba, but also can “produce” rings, create vibuthi and now, on Maha Shivaratri, cough up a lingam!– just like his mentor and teacher, Sai Baba had done all those years ago.

So what do we have today? – We do not have a physical Swami. We do not have unity. We have division and dissent in the Sai world. We have Sai followers who are confused and perplexed, with some even leaving the fold. We have the old ashram in PP, with its beautiful Samadhi, now condemned by Mr. Murthy as a waste of time. We are to be felt- sorry-for. He claims that Madhusudan is now the real source of Sai Baba, there is no other. (Odd that Sai Baba would condemn his own samadhi and abode of the highest peace where he, himself, lived some 85 years.)

Whatever has happened, we now have a sad situation of a “wannabe” Baba, soon-to-be a fully-fledged Baba, all-be-it utterly contentious, acting out on behalf of many gullible people, who cannot bring themselves to accept that the old order has passed away. Not only that but the former Student now has a fly-by-night following world over. There’s to be a new ashram in Ca. USA, probably in the form of a retreat, come ashram, 7th Ray style perhaps? for Madhu devotees to revel in.

Whatever joy and monies may be made out of this new cult, remains to be seen, or even if it can stand the test of time. Our Sai Baba stood the test of time, his presence permeates every stone of the ashram, every tree, every flower, every brick, every cat and dog, every monkey, every insect and every heart and soul there.

…
There is a group of MDH followers who live and hang out in Parthi because they can’t afford the living expenses at their high end fantasy land. The cheapsters have no shame in living off the generosity of PN because here they enjoy a good comfortable and clean lifestyle at very low prices. But their loyalty is to the dark side. They too sit outside the Sai Kulwant Hall or hang out by our coffee kiosks in the ashram trying to recruit more gullible and innocent people. If they have an iota of self respect they should not set foot in the sacred ashram which they denounce and criticise so vehemently. I guess their downward spiral will land them where these ungratefuls belong. And they even display an attitude of arrogance. Why can’t they follow their faith in the fraud all the way without defiling our slice of heaven with their stinking presence. Disgusting bunch of shameless Judases. ~ Comment on facebook by Kuruna Munchi

Until such time we listen to  our Wisdom teachers, all of whom tell us God is within, we will always have the three GMMM – God Mullah-Making- Machines – only too willing to part the gullible from their money and commonsense.