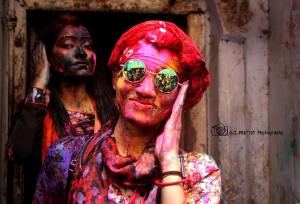 Do not be misled by what you see around you, or be influenced by what you see. You live in a world which is a playground of illusion, full of false paths, false values and false ideals. But you are not part of that world.  ~ Sri Sathya Sai Baba

Here is a small interview with Satish Kumar the Indian Activist, that I thought I would share with you today.

Satish Kumar: When you accept the state of being a stranger, you are no longer a stranger. I have been an exile when everything around me seemed strange and everybody was a stranger. Once I accepted that I didn’t have to belong and I didn’t have to be part of the world, then I was free to be part of it. There was a paradoxical release of the spirit. The world became mine when I was no longer holding on to it. I experienced a deeper monk-hood after leaving the monk-hood. I felt much more release of spirit and was at ease with the world

Parabola: Why do you think that human beings find it so difficult to feel at home?

…
SK: What happens is that human beings are, from the very beginning, brainwashed. Our parents, our teachers, our churches, impose a particular set of values and living style, telling us what we ought to be and do. So our minds are conditioned by society, schooling, media. It’s not the fault of the human being, which is a pure soul. It is a society which tries to imprison the free human being. When teachers like the Dalai Lama or the Buddha or Mahatma Gandhi speak about an unconditioned mind, we find it difficult to understand because we are so conditioned over twenty or more years. You have to have patience. If you have been conditioned for forty years, you have to allow at least ten or twelve years to be deconditioned.

Parabola: Babaji, the wise man that you met in Benares, told you, ‘With the third eye one can see and experience the whole, the totality.” If this is possible, to experience the totality, does one feel oneself more or less a stranger in the world?

…
SK: If you can see with the third eye―which is seeing reality when you close your eyes, because there is something more to the world than meets the eye―then you find that what is around you is a metaphor, and then you find that metaphor beautiful. Then the trees and the ponds, the lilies and lotus and birds and animals and parents and children and women and men, everything becomes beautiful. It is a transformation of your perception and of your consciousness, so you see the world with fresh, new eyes―which is the third eye, the eye of the heart. The Buddha told us in his Lotus Sutra that when you sit by the pond and meditate on the lotus, you see the lotus has its roots in the mud, deep under the lake, but the petals always remain above, and that beauty to me is wonderful. And in the same way, being a stranger is a beautiful state of being. So it is difficult to answer whether you feel more or less a stranger.

The Dalai Lama stands for achieving peace and kindness by way of peace and kindness, and since Gandhi and Martin Luther King aren’t around, he’s a placeholder for that kind of position. He describes himself as  a ‘simple monk,’ but that’s wishful thinking. He’s a monk that’s been saddled with the responsibility of shouldering the hopes and dreams of millions of Tibetan people. … He’s doing the best he can with that, and frankly, these are the kind of people we admire. Recently another good soul entered  on to the world’s  arena,  taking on the herculean task of restoring the hopes of millions of Catholics.  I am speaking of the new pope, Francis.. 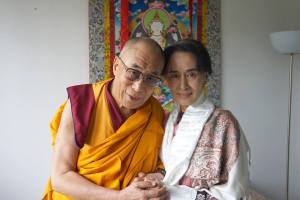 His Holiness the Dalai Lama and Aung San Suu Kyi during their meeting in Prague, Czech Republic on September 15, 2013. Both Nobel Peace Laureates are in Prague to attend the 17th Forum 2000 Conference on Societies in Transition. (Photo by Jeremy Russell/OHHDL)

An excerpt from You don’t need to be perfect to have a happy life!

When the Dalai Lama and some of his followers began to work with
Western scientists, they were surprised to find that self-esteem was
an issue, that so many Westerners did not love themselves and that
self-hate was pervasive. The discrepancy between self-love and love
for others—between miserliness toward ourselves and generosity toward
our neighbors—simply does not exist in Tibetan thought. In the words
of the Dalai Lama, “Compassion, or tsewa, as it is understood in the
Tibetan tradition, is a state of mind or way of being where you extend
how you relate to yourself toward others as well. ” When the Dalai
Lama was then asked to clarify whether indeed the object of compassion
may be the self, he responded:

Yourself first, and then in a more advanced way the aspiration will
embrace others. In a way, high levels of compassion are nothing but an
advanced state of that self-interest. That’s why it is hard for people
who have a strong sense of self-hatred to have genuine compassion
toward others. There is no anchor, no basis to start from.

There is much research pointing to the importance of self-esteem when
dealing with difficult experiences. Recently, however, psychologist
Mark Leary and his colleagues have illustrated that especially in hard
times, compassion toward the self is actually more helpful than
self-esteem is. Leary explains, “Self-compassion helps people not to
add a layer of self-recrimination on top of whatever bad things happen
to them. If people learn only to feel better about themselves but
continue to beat themselves up when they fail or make mistakes, they
will be unable to cope nondefensively with their difficulties.”

Self-compassion includes being understanding and kind toward oneself,
mindfully accepting painful thoughts and feelings, and recognizing
that one’s difficult experiences are part of being human. It is also
about being forgiving toward ourselves if we perform poorly on an
exam, make a mistake at work, or get upset when we shouldn’t. Leary
notes that “American society has spent a great deal of time and effort
trying to promote people’s self-esteem when a far more important
ingredient of well-being may be self-compassion.”