Today is a pretty good day for the mathematically inclined! All of the numbers in today’s date (8/5/13) are in the Fibonacci sequence. If you use the American ordering of dates, the numbers are in order.

Nature, never ceases to amaze me in setting the Golden/Phi relationship in such perfection of form and beauty.. 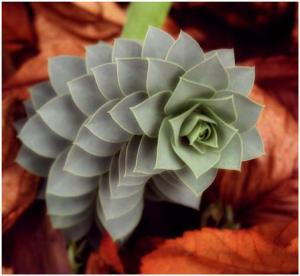 Wikipedia says a fractal is “a rough or fragmented geometric shape that can be split into parts, each of which is (at least approximately) a reduced-size copy of the whole”.

Fractal architecture is generated by the application of fractal geometric principles to the design of facades and building forms. Here are some examples of  fractal architectural facades. Yannick Joyce, from Belgium’s Ghent University, argues that this type of geometry has been used in architecture for two main reasons:

1. Fractal rhythms, created by midpoint displacement, are used as a creative tool to generate a variety of architectural components, such as planning grids, strip windows, noise abatements etc. Examples can be found throughout architectural history, from Doric entablatures to modern facades.

2. The typical measurement techniques of fractal geometry are used to analyse the structure of buildings. The box counting dimension, for example, is a measure for the recursivity of detail on ever smaller scales. An extract from Joye’s Fractal Architecture Could Be Good for You:

Pythagoras described geometry as visual music. Music is created by applying laws of frequency and sound in certain ways. States of harmonic resonance are produced when frequencies are combined in ways that are in unison with universal law.