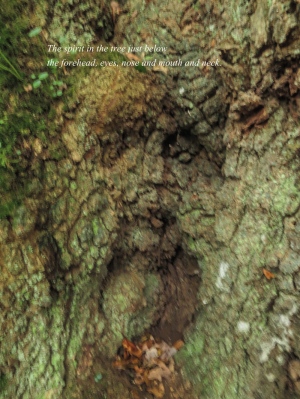 Spirit in the tree – the face in the bark, forehead,eyes,nose and lips, and neck. – Best seen from a distance. 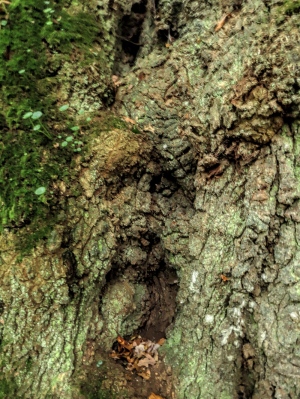 SPIRIT IN THE TREE – For Real And Not trick photography!

From my original thoughts on seeing the face in the bark.

“I don’t know what is happening here. Certainly, I had nothing to do with it. Today, out walking in the local park of the Chateau Tronjoly just down from our home, I was  busy taking photos for “My House” album, when something very odd took my attention.  I saw a face in the bark of an ancient tree.  So here’s what I saw, or what I thought I saw and that is a youngish woman staring back at me. You too may see the face if you look at the photographs  long enough.   I haven’t  changed these photos other than lighten them up a bit.  The  manifestation  occurred  while I was walking down the back of the Chateau,  following the steam as it meandered past the old  ruins of coach-house where upon I found two unusual trees. I had not noticed them before, nor their unusual shape. There is a label on each tree. although I could not read what is written there.

The trees themselves are ancient. I would dare to say they were probably planted hundreds of years ago. The original Chateau dates from the 13th Century. The trees have not been touched or damaged due to their superb location near the Chateau and thus protected.  On my first encounter with the trees, I took long distance photos at first then I moved forward to take an up close.” I pointed my camera and was amazed by what I saw  looking back at me there in the ancient moss covered bark.  Staring at me a nympth like  face!  In real life (3D) it was much clearer than in these photos. Still you can see a likeness to a nympth  in the trunk of the tree,  when leaning away from the computer. The forehead, nose and lips, and neck are clearly defined. The face is so clear and spirit like, the eyes, looking outward – half open, half closed. I moved around the bark on the tree but the face remained clear. I took about six pictures, all  they are extremely clear on my camera, although not so clear up on this screen.  I am not surprised to see such things here in this part of Brittany, so renowned for its spirit like beings, ancient druids and  medieval ceremonies etc. The face is not carved. The bark is natural although he trees are under protection.” ~ eve

Here is some light reading on Tree Spirits

I have always believed in tree spirits. It just makes sense.  There has been much written about them from way back.  It is believed that spirits and ghosts use trees as a dwelling place when visiting the earth. This theory goes way back to the Old Testament where there are references to “sacred groves”. The early Celts, Romans and Egyptians all believed in tree spirits. The Egyptians believed that it was deities who occupied their trees. In India, shrines have actually been built under trees to gain the favor of a revered spirit. Many have believed that if you cut down a tree with a spirit dwelling in it, you will lose your life. The Celts believe that all trees have spirits. Some of the more common “spirit” trees would be ash, apple, cedar, oak, cherry and pine to name a few. Each of these trees are said to host a particular type of spirit. Are these just superstitions? Perhaps, but I continued my search for answers.

There is said to be a famous haunted tree in Gilberton, Alabama in the United States. A woman named Linnie Jenkins claimed to hear strange noises and crying coming from her pecan tree which was located on her front lawn. It attracted media attention, and by 1981 thousands of people from all over the country came to see the mystical tree. It was discovered that the house had been built on the site of an old Indian graveyard, and many believed the cries heard were from those Indians who had died.

Have you ever heard of Huna? Huna is a philosophy of ancient Hawaiian magical shamanism and healing. In Huna, it is believed that everything is “alive, responsive and aware” therefore everything has a spirit. Huna teaches that spirits are connected even if they are of different life forms. For instance, human spirits connect more closely with other human spirits. But, human spirits connect with animal spirits as well, especially dogs and horses. Huna states that human spirits also have a very spiritual link to the tree. This may be the
reason why so many people are distraught when a tree is destroyed. For reasons unknown to us, we form a connection to it. Wisdom can be gained from trees, especially old trees. Supposedly, tree spirits act as guardians and protectors. How often has a person taken comfort in leaning against a tree trunk or lying on the ground beneath its branches? This brings to mind the children’s story The Giving Tree by Shel Silverstein. Even the book Lord of the Rings by J.R.R. Tolkien, refers to tree spirits.