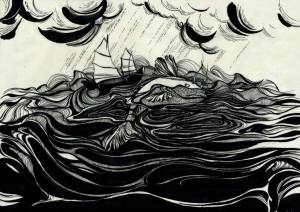 During the past 4 weeks we have watched Greece battle with the IMF, The German and French Banks, the politicians and finance ministers for a better deal. They have not succeeded. Even with their brave determination at a solid “No” vote in last Sunday’s referendum, they still look like they will be worse off than before.  And no matter what we might think of Greece,  as being irresponsible, the ordinary people who probably were never in a position to be other than what they are today, continue to suffer horrendously, under austerity measures that are ruining expectations in Europe for any reasonable recovery.  Banks, it seems, can be bailed out. People can’t.  Greed has given way to a new lower goal that beggars belief.  It’s called Evil  Selfishness.

Sri Yogananda, wrote often about human greed. He called it Evil Selfishness. This is how he describes it.

“Evil selfishness is that which actuates a man to seek his own comfort by destroying the comforts of others. To be rich at the cost of another’s loss is ignorance, and is against the interests of the higher individual Self of the persons who engages in such selfishness. To delight in hurting others’ feelings by carping criticism is also evil selfishness. Evil Selfishness carries a huge karmic debt, that has to be paid back. (Bankers included.) 🙂

True and good selfishness motivates a man to seek his own comfort, prosperity, and happiness by also making others more prosperous and happy. Evil selfishness hides its many destructive teeth of inevitable suffering beneath the apparently innocent looks of temporary comfort-assurances. Evil selfishness encloses one in a small circle and shuts out the rest of humanity. Good selfishness takes everybody along with one’s own self into the circle of brotherhood. Good selfishness brings many harvests – return services from others, self-expansion, divine  sympathy, lasting happiness, and Self-realization.

To avoid the pitfalls of evil selfishness, one should first follow and establish himself in the pattern of good selfishness, wherein one thinks of his family and those whom he serves as part of himself. From that attainment, one can then advance to a practice of Sacred selfishness, or unselfishness in which one sees all the universe as himself.”

Now is this black and white to you? 🙂