Construction of Bayeux Cathedral began in the Roman period, under Bishop Hugues, to continue under William the Conqueror’s brother, Bishop Odo (11th Century). Following serious fire damage during the 12th Century, the cathedral was rebuilt in Gothic style in the 13th Century. Construction of the central tower began in the 15th Century, under Bishop Louis d’Harcourt, to be completed only in the 19th Century following major work by Eugène Flachat.

Excerted from an interview with Ram Dass. A Conversation with Ram Dass by David Ulrich 2017 for Parabola Magazine.

“The soul is not part of the incarnation. It comes into the incarnation. And the soul is not afraid of death because it has done it so many times. And now the ego is individual, and the world at this moment is ruled by nations which are egos. And I find, for example, that the United Nations is very ineffective. But then what would we substitute? We could substitute wise beings from different religions or different states—philosopher kings, if you will.

If you want oneness in society, you have to teach people to go inside instead of going outside, because if they want peace, they need to find it within. I remember being at a peace rally. Everybody was yelling, “PEACE PEACE!” That isn’t peace!  Peace is inside, in me and in everybody else. If you want peace, you go down in.”

Sometimes a visit to a catheral like the one in Bayeux can also bring you down into the heart. The tranquility and sacred atmosphere of this beautiful interior – once the crowds have left – can be felt. It is easy to sit down and breathe deeply and find that peace in the depths of your own sacred being. We stayed for three glorious days but three days is not enough to discover all the wonderful sites in this special Normandy town. Today I offer some of my photos of the elegant cathedral in Bayeux.

This photo is provided by the Calvados Tourist Office. Photo from the crypt.

My photo was does not have the same clarity .

From Kim Munch with thanks.  ~ Not sure if it’s been posted before or if any of you magick enthusiasts have seen it. But what we have here, is A facsimile of Irish poet William Butler Yeats’ magickal journal containing diagrams and other information from the Golden Dawn. From the National Library in Dublin.

…
“Yeats is considered A pillar of both the Irish and British literary establishments, in his later years Yeats served as an Irish Senator for two terms. He was a driving force behind the Irish Literary Revival, and along with Lady Gregory and Edward Martyn founded the Abbey Theatre, serving as its chief during its early years. In 1923, he was awarded the Nobel Prize in Literature for what the Nobel Committee described as “inspired poetry, which in a highly artistic form gives expression to the spirit of a whole nation.” He was the first Irishman so honored. Yeats is generally considered one of the few writers whose greatest works were completed after being awarded the Nobel Prize; such works include The Tower (1928) and The Winding Stair and Other Poems (1929). 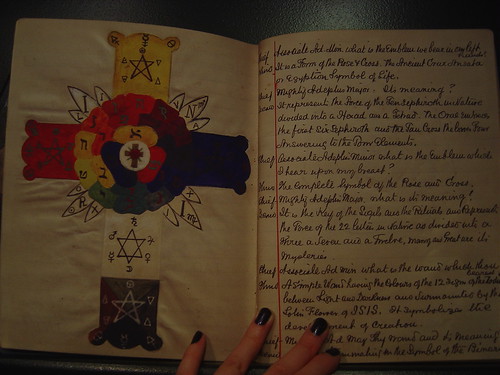 Something about William Butler Yeats

William Butler Yeats (1865-1939) was born in Dublin. His father was a lawyer and a well-known portrait painter. Yeats was educated in London and in Dublin, but he spent his summers in the west of Ireland in the family’s summer house at Connaught. The young Yeats was very much part of the fin de siècle in London; at the same time he was active in societies that attempted an Irish literary revival. His first volume of verse appeared in 1887, but in his earlier period his dramatic production outweighed his poetry both in bulk and in import. Together with Lady Gregory he founded the Irish Theatre, which was to become the Abbey Theatre, and served as its chief playwright until the movement was joined by John Synge. His plays usually treat Irish legends; they also reflect his fascination with mysticism and spiritualism. The Countess Cathleen (1892), The Land of Heart’s Desire (1894), Cathleen ni Houlihan (1902), The King’s Threshold (1904), and Deirdre (1907) are among the best known.

After 1910, Yeats’s dramatic art took a sharp turn toward a highly poetical, static, and esoteric style. His later plays were written for small audiences; they experiment with masks, dance, and music, and were profoundly influenced by the Japanese Noh plays. Although a convinced patriot, Yeats deplored the hatred and the bigotry of the Nationalist movement, and his poetry is full of moving protests against it. He was appointed to the Irish Senate in 1922. Yeats is one of the few writers whose greatest works were written after the award of the Nobel Prize. Whereas he received the Prize chiefly for his dramatic works, his significance today rests on his lyric achievement. His poetry, especially the volumes The Wild Swans at Coole (1919), Michael Robartes and the Dancer (1921), The Tower (1928), The Winding Stair and Other Poems (1933), and Last Poems and Plays (1940), made him one of the outstanding and most influential twentieth-century poets writing in English. His recurrent themes are the contrast of art and life, masks, cyclical theories of life (the symbol of the winding stairs), and the ideal of beauty and ceremony contrasting with the hubbub of modern life.

This autobiography/biography was written at the time of the award and first published in the book series  Les Prix Nobel. It was later edited and republished in Nobel Lectures.  To cite this document, always state the source as shown above.

Link to the website for the Golden Dawn. This website is superb. There are many  esoteric diagrams and writings for those of you wishing to learn more about the “Soul of Man.”

The Italian one euro coin, based on Leonardo da Vinci’s sketch of ‘Vitruvian Man’.
The sketch shows the proportions of the human body according to Vitruvius’s De Architectura. (fl. 1st century BCE), and it is a physical expression of Yeats’s  integrated ideal,, ‘that Unity of Being compared by Dante in the Convito to that of “a perfectly proportioned human body”   ( A Vision B 82). In his chapter ‘Of the Proportion, Measure and Harmony of Man’s Body’, H. C. Agrippa adapts the concept to planetary and zodiacal schemes, further on in this page.
For more on the drawing, see the Gallerie dell’Accademia, Venice; the notebook is not normally on display.

The constitution of the human being, that Yeats outlines in A Vision, is a complex intersection of a number of different elements. It is an esoteric system, based upon the idea of different levels or planes of being, which interact with each other to a greater or lesser extent. Fundamental to the picture is the doctrine of reincarnation, so that certain core elements are retained from one life to the next, while others are shed at death or during the period between lives.

The great sages of India say:  The Self, which is Knowledge, is the only Reality. Knowledge of multiplicity is false knowledge. This false knowledge, which is really ignorance, cannot exist apart from the Self, which is Knowledge-Reality. The variety of gold ornaments is unreal, since none of them can exist without the gold of which they are all made. Here is a beautiful paragraph from William Segal on just this. The piece is called “Unfolding..”

Watching quietly, anticipating nothing, I am open to what is here, now. I look at myself reading these words. I read slowly. I see the way I am sitting. I sense my body, the arising and the movement of thoughts, of feelings – the way my breath comes and goes. I am the witness and the witnessing, passively watching and actively being watched.

I see that there can be a further letting go, a beginning relationship to an unchanging inner stillness. Like a white sheet of paper that retains its nature, I remain receptive but unstained, quietly in touch with what is taking place, attention wholly, in the moment. Is there help in a stop? In an unfolding to a fresh time/space? Is there a way to be without doing?

Listening to the silence which is present in the stillness I become aware of a new web of relationships, of a unity bringing the body/mind structure to another threshold. I sense that there is another Reality that can be served. Again, a stop.

Will the fragility of my attention survive the experience of  turning this page?