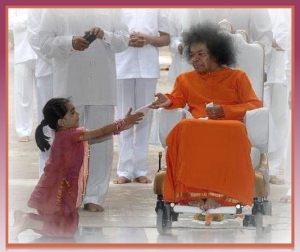 A very long time ago while living in UK I wrote “Prasad the Guru’s Grace“. I remember at the time I wrote it, there were still blessed sweets in my filing cabinet. I kept the extra sweets there in a hidden place.  From time to time, I’d look at them  remembing the  previous visit to Sai and the moments of joy, when the  sweets were thrown. I’d always done well with blessed sweets, often coming away with handfuls… Those years were some of the best in my life. I doubt  if ever I will forget them.  Although prasad is a gift from the guru, life itself is  prasad if we look around us and count our blessings.

Many times during Swami’s Darshan, I’ve received blessed Prasad. Excited devotees would buy an assortment of delicious sweets, place them on a shiny silver platter and carefully decorate the offering with an abundance of colourful flowers. Often, by the side of the sweets, lay packets of tiny golden lockets, letters and deity statuettes all lovingly arranged for Sai’s attention.

Usually, the determined devotees would wait for days for a suitable seating position where Swami could bless the platters. This would mean re-arranging the sweets, and improving on their floral skills, until finally, each platter resembled a beautiful bouquet of flowers.

Often, the devotee’s efforts received Swami’s blessings. He would walk along until he reached a superbly decorated platter, stop, look and bless the sweet offering. While doing so, he would take large handfuls of the delicious selection and throw them over the seated devotees. With loud aahs! and whoops of joy, and small gestures of gratitude, the sweets would be accepted and passed around to others, or sometimes kept for loved-ones and friends.

I remember many wonderful moments with Swami as he blessed sweets. Frequently, he would throw them high into the air and one would land on my head, chin, or nose. His favourite target seemed to be my headband. Once, a sweet lodged itself between the folds of my shawl, and not until I stood to leave, did it fall on to the floor where I could retrieve it. But mostly, sweets would simply land in my lap or even beneath my cushion; how they found their way there, I’ll never know. But always, I felt elated when a blessed sweet came my way. I would keep my precious catch until a quiet moment, then eat it, slowly savouring the delicate flavour.

On one occasion in 1992, when seated in the front line at Prasanthi Nilayam, Swami came along and playfully tossed sweets to those seated all around, but missed me altogether. It had been one of those days when I had felt less than happy with myself and therefore, undeserving of a blessed sweet. Mentally, I expressed to Swami that I didn’t deserve one.

Immediately, he turned and tossed, with determined accuracy, a large toffee. The missile landed with a loud thud on my head, shattering the silent moment. This of course, left me startled, because he had read my thoughts! 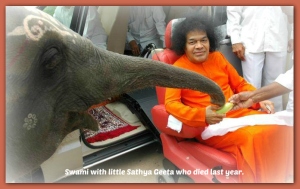 During my summer visit last year, Swami blessed my sweet platter for the last time. I remember the occasion well, for he had playfully thrown the sweets back at me! I had not been successful on my first attempt, for a very bewildered Swami had been offered three platters, all at the same time. He had chosen just one.

On another afternoon, I’d taken my sweets to darshan and again had been unlucky. Fortunately, on my third attempt, I was lucky enough to be seated near the verandah passage. I patiently waited through the hot afternoon until after Bhajans when he would walk back to the Poornachandra Hall.

When bhajans were over, Swami came from the temple and began his stroll along the aisle, where I anxiously sat hoping for his attention. He spotted my platter and indicated for me to hold it up high. I immediately did so, and he, playfully picked up just a few of the assortment and threw them back at me! I looked up to express my thanks, and caught him smiling from ear to ear. I noticed the luminescence of his dark eyes, and felt the immense heat radiating from him by his nearness (a characteristic not often discussed by Sai writers or devotees).

As he continued his walk down the aisle, I felt such deep gratitude, I wanted to share the blessed sweets with everyone.

As I began to joyously distribute the sweets, a lady sitting behind quietly refused the offering. I couldn’t believe it! She had been sitting there for hours, but now didn’t want a blessed sweet. I began to recalled a similar situation a week earlier, when I too, had refused one.

On that particular occasion Swami had not thrown sweets, only blessed them. The lucky recipient had offered sweets to those sitting nearby. Somehow, one had been offered to me, but I refused. I don’t know why, perhaps because he had not thrown it directly to me.

Now sitting there with my blessed platter, and painfully feeling the rejection of my offering I instantly regretted not accepting the blessed sweet from the previous week: for it is in the giving and receiving, we truly show our appreciation of one another.

Blessed sweets are PRASAD a gift from the Guru; a gift that has the power to change our lives. When a master gives food to his devotees, he is in fact, giving of his energy. If we take Prasad with this understanding, it can gladden our lives and bring us closer to him.

Blessed Prasad takes away all sorrows, all miseries, and it calms down the heart completely 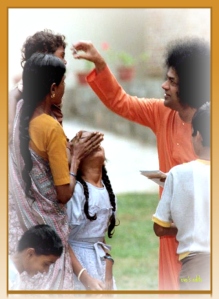 Here is a small story about the power of Prasad:

Once a young man came to the ashram of a master, because he was suffering from despair. It really didn’t matter what he did, the despair continued to plague his life. Eventually he prayed for it to be taken away, but nothing happened and the despair and suffering it brought now intensified.

A woman devotee tried to comfort the lad, and having received some blessed food, she broke it into pieces and gave some to him.

He ate a small piece of the food slowly and deliberately, when he had finished, he found to his amazement the despair had disappeared. He felt completely well.

No matter how we receive Prasad, or what form it takes, be it sweets directly given to us by the Guru, or blessed food shared with us by others, it is always full of Divine Energy. Having accepted such blessings, we accept the Guru’s grace. The secret is to appreciate it.

A week after Swami blessed my sweet platter in 1995, he stopped blessing sweets altogether – a delightful sharing of joy, now truly missed.

I am writing this piece to thank Sri Sai Baba for the many beautiful occasions, when he threw playfully, lovingly and sometimes tenderly, his beloved Prasad. I will miss those shiny silver platters full of sweets – dreadfully.

On my way to Heathrow airport in Novemeber 2012, to catch the plane to Bangalore. I stopped to take photos in an English garden centre.. I love to to take photos of the small animal sanctuary there, particularly in winter time. I took about twenty photos.  I had no idea until much later when  I showed this photo to a friend in Puttaparthi, of  the remarkable  “Sai image”  in this photo.. My friend said, “Do you see Swami there?” I answered, I had not noticed. She pointed to the trees, “there,” she said.. Do you see Swami in the trees?